For this part I decided to leave everything as I wrote it, there and then! Hopefully the note form will give a picture of the trek in as few words as possible, allowing the photos to do the work. Also watch the day numbers as you read along… 😉

Felix has joined us as he is heading in the same direction. We headed along and round the gorge finally having to descend to the gorgeous ice blue river below then back up again the other side. This is a steep and long descent in a short distance. Steps on both sides — each one a different height of depth creating more effort.

ABOVE: 1. Views like this were around every turn. 2. The beautiful clear mountain rivers. 3. Toward the end of a particularly hard climb, I took a corner where an ox stopped climbing, turned to see me then stopped to have a rather enormous wee, 4. Three rather tired step junkies!

We see the odd waterfall — always check behind as there are beautiful views and hidden waterfalls!

Toward the end of the previous day I could feel the initial twinges from my calf muscles and I was hoping that I’d be ok the next morning. Unfortunately I was wrong so I’m forced to take a rest day.

We said goodbye to Felix as he’s heading up to Annapurna Basecamp.

I saw my second humming bird in my life but first thought it was a bee with a long proboscis! It took me a moment to realise what I was looking at as it was so small! 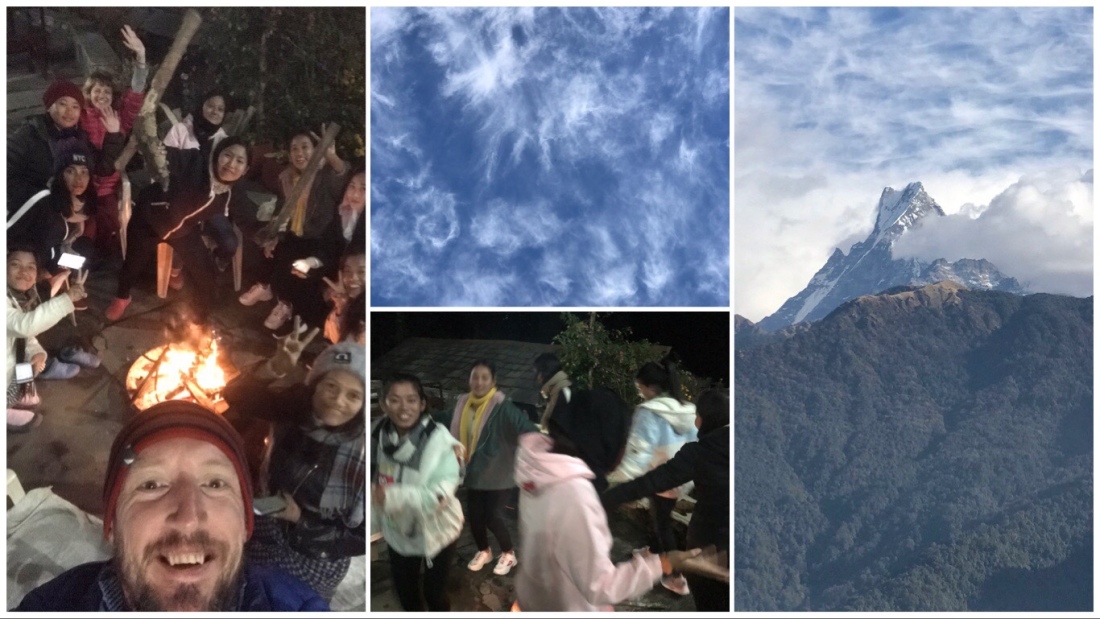 Had an awesome insight into local life with some girls from another village having a dance around an open fire, great times! Beautiful day sky and mountain range. 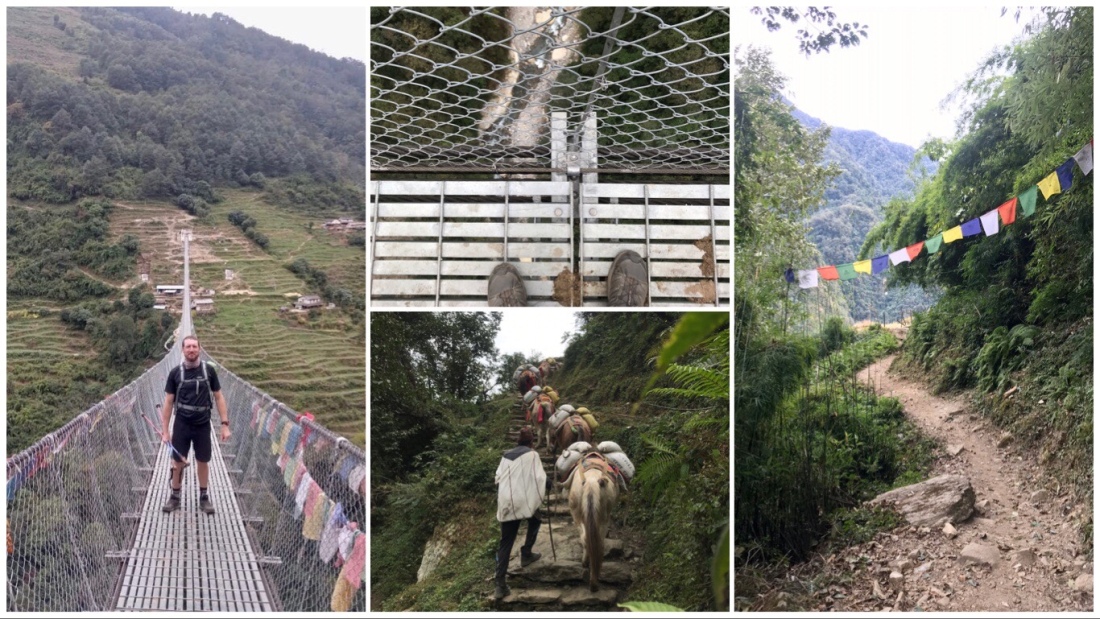 Walked a lovely trail and crossed an enormous cable bridge. Stayed at the Awesome View homestay. And what an awesome view with breakfast/dinner staring at snow capped mountains. 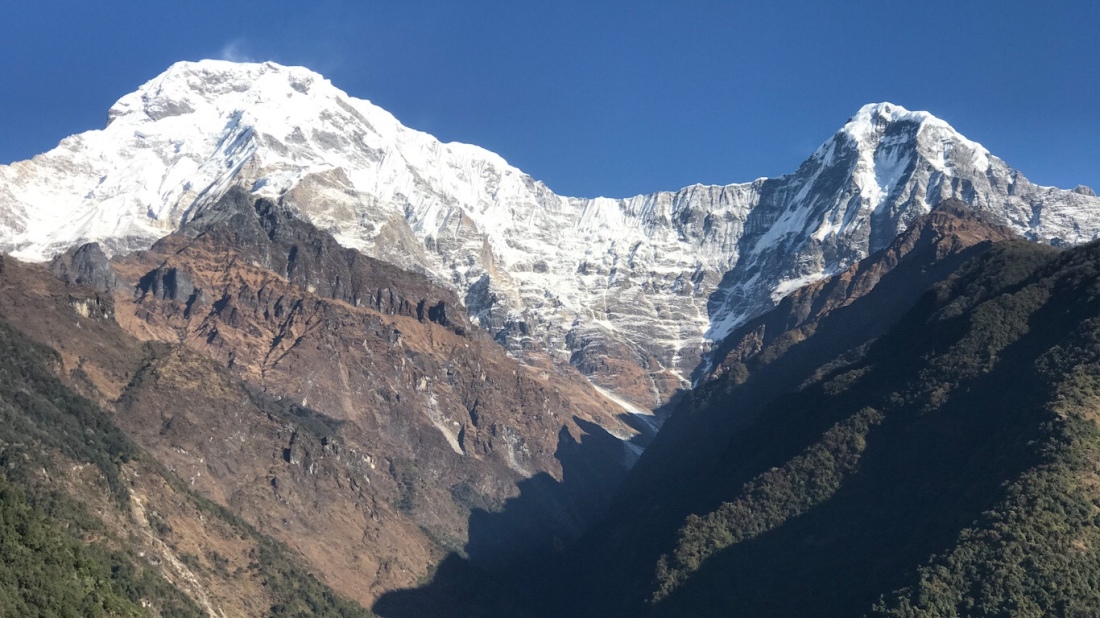 Our short trek to Sirluwa viewpoint took us passed a store selling not only trekking essentials and clothing but Adidas Superstar 2 shell toes … you know, just in case! 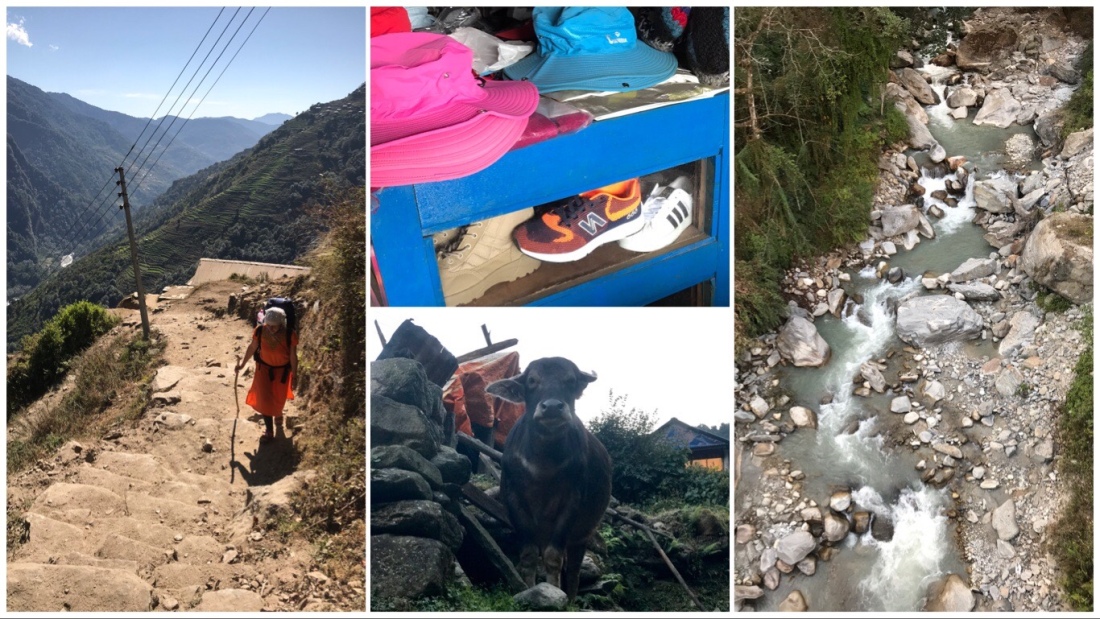 Unfortunately my legs are still a bit sore so we stop and turn back about 75% of the way. So many damn steps! 😀

Started the day with breakfast with a view.

Saw ravens fighting over food mid–air. The buzz of their wings as they passed overhead was phenomenal! 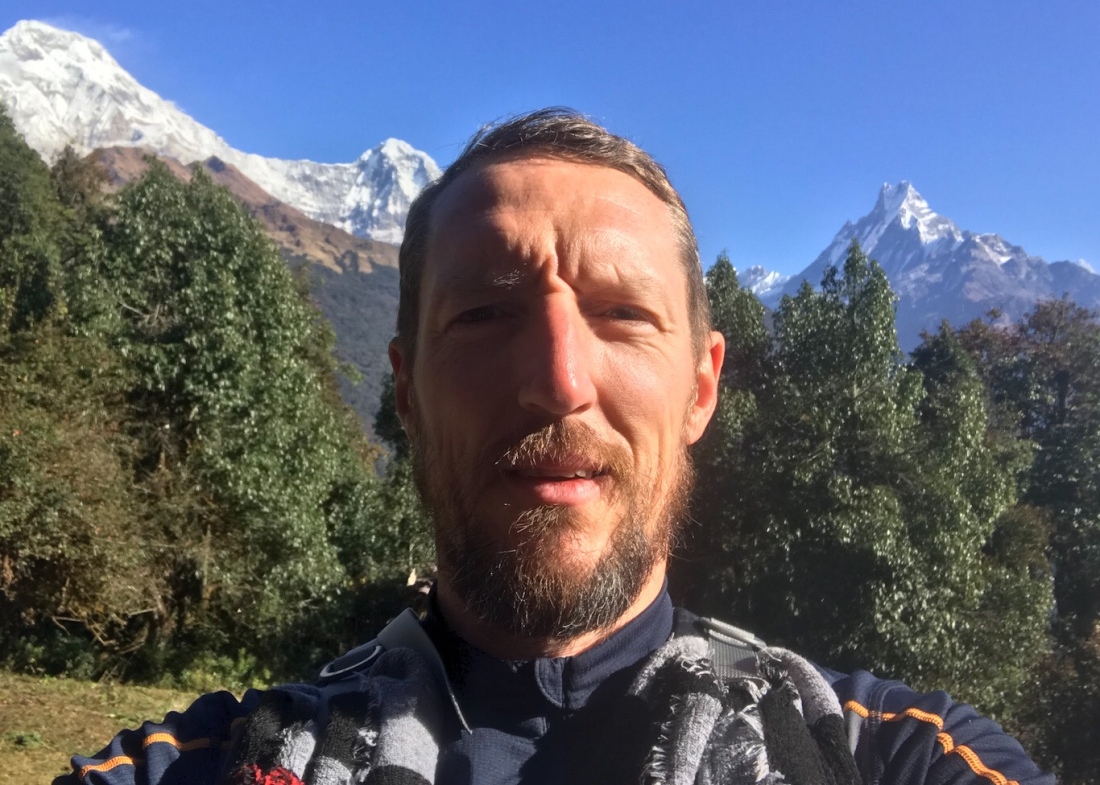 We took the slightly wrong trail and hit Tadapani instead of Kharka.

Woke to frost on the trail. The trail had also changed to a more rocky soil and the surroundings bore moss and is more jungle.

A local rode a horse down trail on a rather steep route, it was amazing how the horse stepped so diligently among the rocks.

The trail changes from jungle to following a small bubbling river. We pass through some small gatherings of homestays and are blocked temporarily by passing sheep and their shepherd — we wait a good 5 minutes as there is a long cue!

I get altitude sickness at about 3000m. So we stop at the next homestay. A scary affair as I couldn’t think straight! Panicked but held it together.

Had a terrible misunderstanding at the home stay where the mum gave us a good price then her daughter tried to charge full price out of season! A lot of shouting from her so we just left. The whole thing deeply bothered me but thankfully I accepted that the blame didn’t lie with us.

It was also the coldest night I’d spent so far, fully clothed including my winter down jacket.

We see clouds wash over hill top en route with superb views of Annapurna range. How amazing to be at the same height of the clouds!

ABOVE: 1. A view through a hole in the wall of cloud to my left as I’m trekking the ridge. 2. The wall of cloud hitting the hill and rising. 3. The cloud starts to make it over the top.

Climb to Poon Hill with yet more steps. I feel amazing at making it here! I’m so blessed to experience all of this and be in the clouds!

This is most definitely the coldest night of the entire trek as the altitude and pending winter are in full effect. Yow! 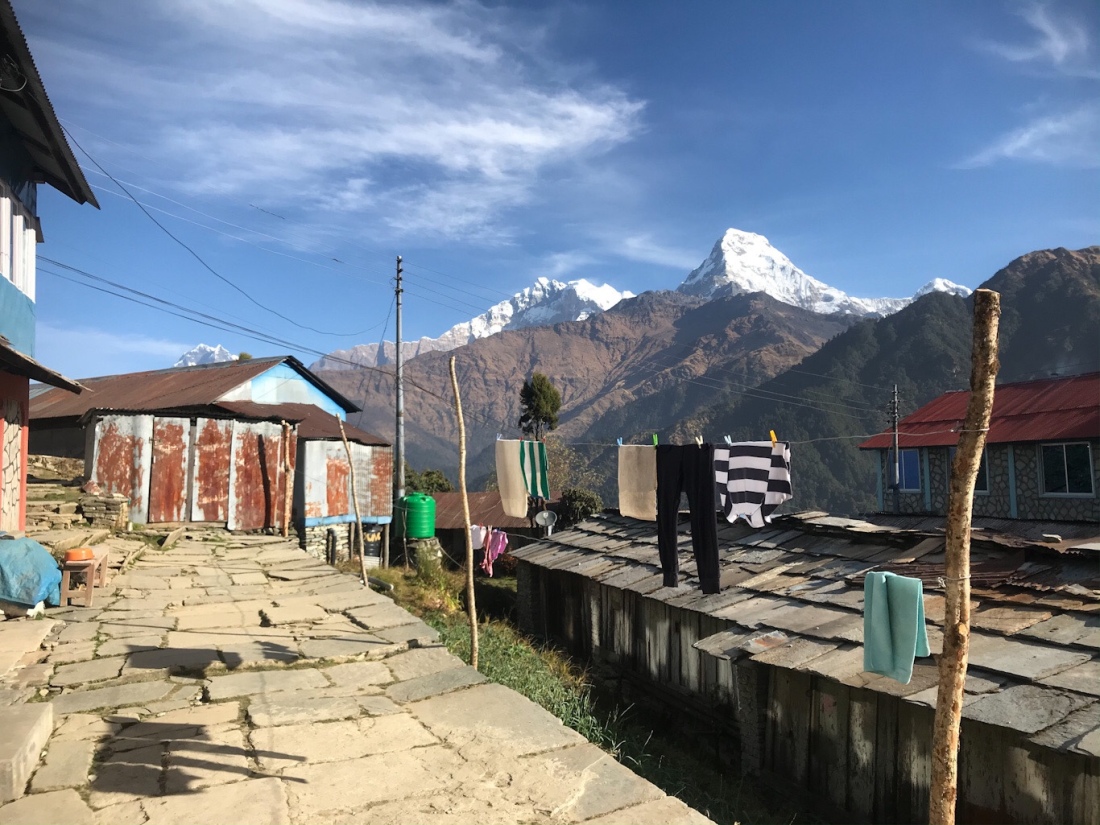 Start the big descent to the main road back to Pokhara. Beautiful walk once the steps fade into awesome trail following river and gorgeous waterfalls.

For some reason I think about passing on walking sticks (see the third image above), and I see an English couple coming the other way — him with one stick and her with none — I say ‘that’s brave trekking here without sticks‘. She laughs and we briefly chat. After 30 seconds of walking on, I call them back and give her my sticks! I won’t need them and they were almost free to me so I pass on the goodness!

Help class of kids climb with teacher ‘Temper’. He asks us to remind them all to get a move on as we pass them. I thoroughly enjoyed doing so as it broke the monotony of walking down the endless steps.

See a few people with guides who are well out of their depth fitness–wise! One lady is only a fifth of the way up and looks exhausted. I’m surprised they accept the job but I guess survival comes first!

I stop for 20 seconds to allow guide to film couple trekking — 20 seconds of my time gave them a lifetime of memories — good stuff!

Some of the way we’re accompanied by stray dogs, happy to have company I guess! The views are stunning and the trail turns to rocky gravel road.

The end of an amazing time!

Eventually we stumbled across a parked bus and jumped onboard back to Pokhara. Even that ride in itself gave gorgeous views but also nearly shook us both to death! 😄

Words or the images in this article can not describe the full wonder I experienced, and Elena too! It was hard writing this because of so much I wanted to write about. I also had to be really strict with my photo choices as I estimate there are over 600 photographs … easily! It was heartbreaking to skip so many.

2 thoughts on “Them there be mountains boy! Nepal Trekking Part 2/2”